Why do popcorn and movies go together?

Imagine walking into a movie theater without being greeted by the scent of freshly salted and buttered popcorn. It's hard to believe that for decades, this was the case. Often tumultuous and ever evolving, the relationship between popcorn and movie theaters is younger than you may think. So, how did this perfect pairing come to be?

In the 1920s, movie theaters were built with ornate architectural elements and referred to as movie palaces. Chicago’s Patio Theater, which opened in 1927 and is still in operation today, is a quintessential example of the era’s movie palaces. Rich with Spanish and Italian architectural elements, the single-screen theater houses a large auditorium that currently seats 1,300. The intricacies of the movie palace are even highlighted on the auditorium’s ceiling, which through the projection of clouds and blinking stars, emulates a nighttime sky.

During the movie palace era, the reason theater owners opposed selling popcorn wasn't because it was unpopular. The snack had been widely consumed at carnivals and fairs for decades. Owners were against popcorn because they believed it would ruin the first-rate atmosphere they strived to create. Sold from a cart, popcorn had a reputation for being an unpolished, street food. The snack’s messy nature also threatened to ruin a theater’s furnishings.

Still, no matter how forcefully they objected, owners were unable to keep popcorn out.  Seeing the profit to be had, popcorn vendors began stationing their carts outside of theaters and selling bags of popcorn for 5-10 cents each. Patrons would buy the snack and then bring it into the movies. This angered owners and led to some theaters posting signs requesting that patrons check their popcorn with their coats.

Popcorn vendors weren’t welcomed into movie theater lobbies until the Great Depression. According to Mike Goles, a consultant for The Portage Theater Group—which manages The Patio and its sister theater The Portage, which opened in 1920, popcorn is how neighborhood theaters survived.

Popcorn proved to be the perfect movie partner for many unforeseen reasons. Unlike potato chips, which could only be produced in a kitchen, popcorn could be made on a large scale and from a mobile cart. Popcorn carts also doubled as peanut carts, giving patrons options and theaters the ability to make additional profits.

During the Depression, popcorn remained a cheap treat but going to the movies became a luxury. To get people into theaters, owners lowered ticket prices and hosted elaborate giveaways. Held on the theater’s slowest nights, events like Dish Night and Bank Night drew large crowds of patrons who wouldn’t otherwise be there. At Dish Night, women and teenage girls lined up weekly to receive a new piece in a set of dishware. Bank Night was less diplomatic. Each week a cash sum ranging from $100-$500 was raffled off to one winner who then had to claim their prize within sixty-seconds. If the winner failed to claim their prize within the allotted time, the money rolled into next week’s pot.

Today, incentives are still a common practice at independent theaters. The Patio and Portage often host retro movie nights where the cost of admission is waived and cult classics from the 1980s and '90s are shown. These events are held with the sole purpose of getting moviegoers to buy popcorn.

"People come to theaters sometimes just for the popcorn. They don't even care what's playing," said Roles. He would know. During a free event at The Portage he once went through three 50-pound bags of Orville Redenbacher's® popcorn.

The Great Depression got popcorn into theaters but it was World War II that solidified its place. During the war, sugar rationing lead to the near extinction of soda and candy and Americans began eating three times more popcorn than they had before the war. Popcorn sales rose, but theaters still had to adjust to the war by modifying the way they prepared the snack.

Before World War II, theaters used coconut oil to pop popcorn. The majority of coconut oil was imported from the Philippines which, after the attack on Pearl Harbor was occupied by Japan. With imports from the Philippines to the United States cut off, Americans scrambled to find an alternative. After testing an array of unsuccessful substitutes like soybean oil and beef fat, peanut oil proved best. At The Portage and other theaters, peanut oil is still used to pop Orville Redenbacher's today.

World War II may have changed the country but it didn’t change the mindset of popcorn naysayers. In 1949, Oregon state senator Dean Walker actually attempted to ban the consumption of popcorn at movie theaters statewide. His reasoning for such a drastic measure—patrons who ate popcorn at movies were too noisy. According to Oregon based-newspaper The Eugene Register Guard, Walker went as far to claim that the measure was, “necessary in the interest of public welfare."

Walker’s bill never seriously threatened popcorn’s movie theater partnership but television did. Throughout the 1950s and 60s television made its way into nearly every American household. Movie attendance dropped and popcorn manufactures had to adapt.

In the beginning of the television boom, you could only make two types of popcorn at home—standard kernels or Jiffy Pop’s stovetop popcorn.  Act I®, the first commercial microwave popcorn, wasn’t introduced until 1981. A predecessor to Act II®, Act I was a frozen product sold in refrigerated vending machines. 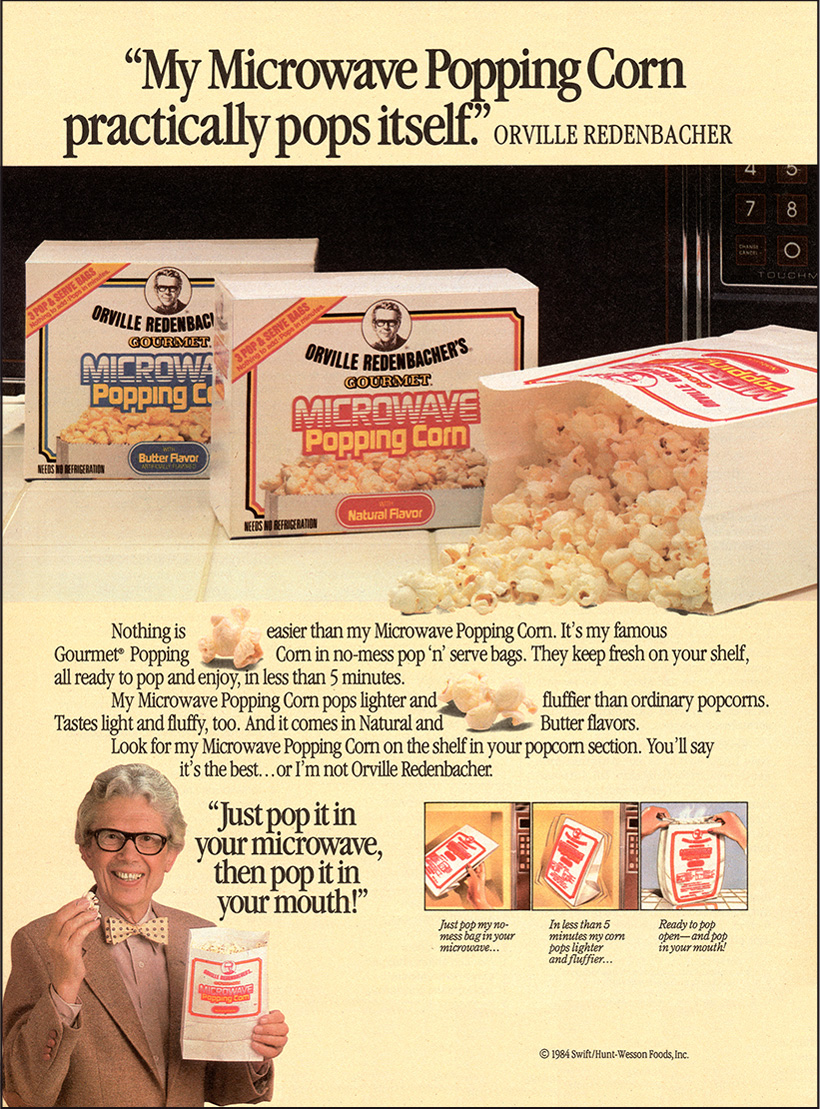 Things began to change in 1965 when Orville Redenbacher and his business partner, Charles Bowman, perfected their innovative and unique popcorn hybrid. This popcorn not only tasted great but it was also lighter and fluffier than any other popcorn on the market. Unlike its competitors Orville’s popcorn left hardly any unpopped kernels, had minimal hulls, and achieved a 44:1 ratio in volume of popped to unpopped corn. To emphasis the premium quality of his popcorn, Orville packaged it in quart-sized glass containers and, in 1970, began to sell his gourmet popcorn kernels at Chicago’s Marshall Field’s department store. Now, consumers could really have a movie popcorn experience at home.

Today, Orville Redenbacher’s exclusive hybrid popcorn is still being popped. Since 1965, the brand has taken their kernels from the living room and into the movies, distributing 47 million pounds of popcorn to movie theaters on an annual basis. So, next time you’re at the movies, take a sniff around. Chances are you’ll smell the familiar scent of salt, butter, and Orville Redenbacher’s popcorn.